Misguided fans have decided to steal Wayne Coyne's hamster ball with him in it!  Run and jump you way out of the venue in this fast paced entry to the XKCD Game Jam 2017.  Enjoy!

Based on xkcd 211 "Hamster Ball Heist"

No Wayne Coynes were harmed during the making of this game.

Built using the Unity Engine. We created all artwork and code during the JamTime. However, we did use some premade sounds (or parts of them). Here's credit where credit is due:

P.S. Randall Munroe, per your alt-text for this comic, I think you owe us a t-shirt!

After various feed back we have made the following changes:

Physics:
- put an upper speed limit on a lot of things to make things more predictable
- remorked colliders and collisions so that they work as expected
- Fixed the double jump by starting the ray outside of the player collider
- Added some steerability to the player while in the air, more akin to clasic platformers

Audio:
- Replaced the grating guitar sound with an "umph" i recorded myself
- Fixed sound on level 1

Story:
- Added an additional intro animation to help set the story so there's less confusion
- Renamed "Health" to "Mojo" to be more in keeping with the theme of the game
- Reworded various texts also to be more thematic
- Added some signs in game to help guide the player and explain what's happening
- Automatically plays the game over scene 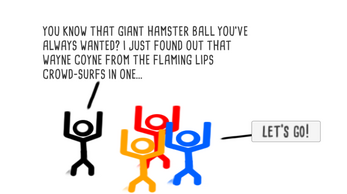 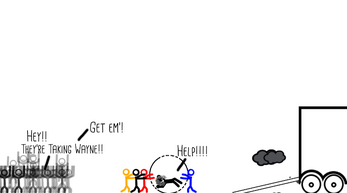